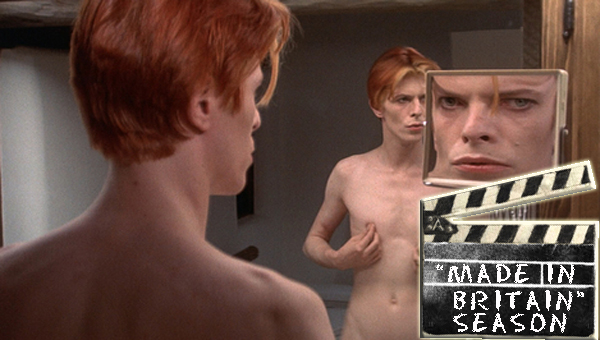 Eschewing the conventional, Nicolas Roeg’s stylish adaptation of Walter Tevis’ sci-fi novel is more often than not a rewarding experience, tempered only by occasional overindulgence. Where one might expect Hollywood spectacle the film offers abstract imagery, and instead of tugging at the heartstrings Roeg delivers sex, sex and more sex. It’s surely a film that could only have been made in the Seventies. But when it’s good, it’s great; beautifully shot, the haunting mood and tone is largely that of sadness and regret.

Newton’s seeming lack of determination to get on with his mission is positively Pinteresque.

David Bowie (looking, it has to be said, uncannily like Tilda Swinton) is perfectly cast as the visitor from a dying world. Armed only with a British(!) passport and a stack of technological patents that make him stinking rich, it eventually becomes clear that he has landed on Earth in search of water to take home to his wife and children (occasionally seen in brief flashbacks on their barren world), and his company’s profits will fund the return trip. But he is prevented from doing so by the myriad distractions of life on Earth – chiefly television and sex with hotel maid Mary-Lou (Candy Clark) – and his kidnapping by a jealous rival firm who want to exploit him for their own ends. Even so, Newton’s seeming lack of determination to get on with his mission is positively Pinteresque.

Bowie makes for a surprisingly sympathetic lead: with his gaunt, otherworldly looks and not-quite-all-there presence, the role of Thomas Jerome Newton seems to fit him like a glove. His obsessive consumption of TV shows, the slow slide in to alcoholism, his failing resolve to get home and save his family, and the doomed romance with Mary-Lou all make for a compelling experience. With a story like that you would think it would be a depressing watch, yet Roeg’s impressionistic approach instead makes it transcendent; the beauty of Earth and the strangeness of its people are sublimely evoked in Anthony Richmond’s widescreen photography and the non-chronological narrative, which perhaps mirrors the mental breakdown of Newton himself.

Newton himself remembers the sex of his past life; a collage of energetic leaping and plentiful goo.

And then there’s the sex – both the human and alien kinds. Rip Torn’s college professor (later employed by Newton’s company) continually seduces his students, amusingly edited so that we see him have the same conversation with each girl in bed. His boredom with his job and his life foreshadows the same apathy that later afflicts Newton. Mary-Lou similarly tries to bed Newton because she sees him as a welcome change and a possible way out of her dead-end existence. Newton himself remembers the sex of his past life; a collage of energetic leaping and plentiful goo. It all gets a bit much after a while, but dull it certainly isn’t.

It is possible to view the story as a religious allegory – the innocent corrupted by a world concerned only with pleasure and power – but later on Newton mentions that there have been other visitors to Earth before him; a sly suggestion that maybe Jesus was an alien? Regardless, it’s a timeless story and it’s spun by Roeg with oodles of style. By the end, you’re thankful that Newton didn’t land in the Earth of the early 21st century – with all the distractions the internet has to offer, he wouldn’t have made it past the first town.

The MADE IN BRITAIN season of restored classics continues on Tuesday 26th June when we’ll be reviewing HOBSON’S CHOICE, screening at Cambridge Arts Picturehouse and cinemas across the country.

2 thoughts on “The Man Who Fell to Earth”