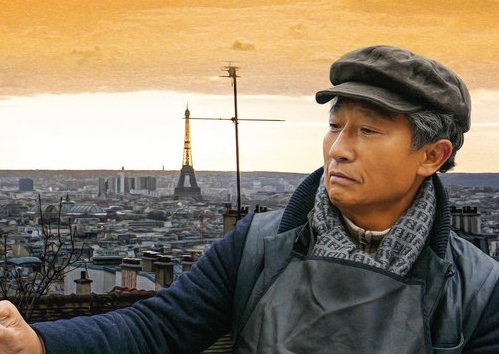 MONTMARTRE DE PAPA, directed by Min Byung-woo (CATS AND DOGS) is an enthralling documentary that follows the life of Min Hyeong-sik, a retired art teacher. The question posed to the audience throughout the film’s first half, and encouraged by Min Hyeong-sik’s son is, quite simply, what will he do after his retirement? Determined to follow the aspirations of his childhood self, Min Hyeong-sik travels to Paris to become a street artist in Montmartre.

Narrated by son and director, Min Byung-woo, MONTMARTRE DE PAPA is Byung-woo’s second feature film and a heartfelt and charming creation that leaves its audience in awe of its charismatic protagonist. The film presents an inspiring and cheery outlook on life that it never deviates from, despite its intent to discuss the sensitive, and increasingly popular issue, of gambling addiction. The film features a few remarkable animated sequences to retell events that were otherwise perhaps not caught on camera, including a pick-pocketing in the Paris Metro, and Min Hyeong-sik in the Monte Carlo Casino. There is a comedic element to it, as the film pits Min Hyeong-sik and Lee Woon-sook, Min Hyeong-sik’s wife, together as hero and villain, respectively, on several occasions. Woon-sook’s one-liners were a personal highlight of the film, and her constant threat to put her fingers in boiling soy sauce if Min Hyeong-sik succeeds in his aspirations (however small or large they may be) is a segment it builds on to perfectly convey the relationship dynamic between two headstrong figures. Though their bickering is seemingly endless, it is clear it stems from a place of heartfelt concern, and it proves to be one of the documentaries’ more relatable moments.

“The film presents an inspiring and cheery outlook on life that it never deviates from, despite its intent to discuss the sensitive, and increasingly popular issue, of gambling addiction”

Min Hyeong-sik’s artistry is humbling in that it does not stem from a desire to make money, but instead is a passion project, and the documentary does well to stress the fact as he seeks to express and capture his feelings in the various paintings and pencil sketches we see him complete throughout the documentary. MONTMARTRE DE PAPA features your classic tourist attractions including the Eiffel Tower and the Moulin Rouge. The family’s visits to lesser-known landmarks that once homed artistic vanguards like Vincent Van Gogh are fantastic and intellectually stimulating, as are their travels to destinations outside of the city’s capital including Èze, Monaco and Nice. The film comes to an end, with somewhat disappointing results for Min Hyeong-sik in regards to his newfound ambition, but the family prosper on and end their last night in Paris at a dance hall as a montage of footage recaps their trip.

MONTMARTRE DE PAPA is a family-friendly fun-filled watch that will leave you awe-inspired from start to finish and as determined to embark on new adventures as the Ryan Murphy 2010 biographical hit EAT PRAY LOVE. An authentic depiction of a city that has been glamorised to death, and an exemplar of Korean cinema, Byung-woo succeeds in taking an otherwise simple trip to Paris under his wing and making it a masterpiece.