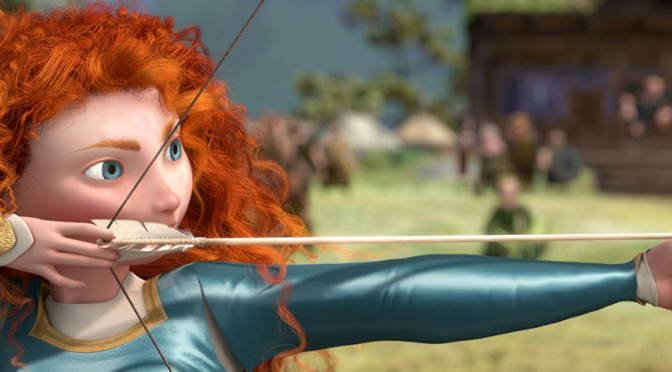 BRAVE is Pixar’s first completely original feature since UP (with CARS 2 and TOY STORY 3 in between) and it’s the first time they tackle Disney’s home ground: the classic Princess story. Though Pixar can hardly be faulted for its beautiful and often groundbreaking digital animation, a couple of its more recent films have received mixed responses as the habitually first-class storytelling has slightly faltered.

Fortunately,  BRAVE excels on both counts. Though the film hangs on a conventional fairy tale plot, it is handled with Pixar’s unique charm and humour. Set in Ancient Scotland, Princess Merida, a skilled archer and wild spirit, baulks at her expected fate as a bride for one of the sons of the clans. After seeking a spell from a witch, Merida accidentally curses her family and she must race to undo the spell before it is too late.

… an intense and delicate exploration of the relationship between mother and daughter.

The trailer and synopses can’t really do the film justice because, as you would hope for from Pixar, the plot twists off from this conventional structure to find a more humorous, human path. Although it handles the expected theme of personal freedom versus responsibility, its primary focus is an intense and delicate exploration of the relationship between mother and daughter. It’s in this element that the film really excels, tugging the heartstrings and drawing great humour from situations and relationships with which much of its audience can identify. Like TOY STORY with a child loving and leaving his toys as he grows up, and FINDING NEMO with a father learning to trust and let go of his son, BRAVE explores a fundamental human relationship; it’s what Pixar does best.

With so much attention paid to Merida (voiced by Kelly Macdonald) and her mother Queen Elinor (Emma Thompson), there is little space in the film for the male characters beyond providing slapstick comic relief. However, Billy Connolly as King Fergus, and the wild antics of his three tearaway sons and the other clan members, continually inject the story with life. The animation is beautiful, and in BRAVE Pixar have become masters at creating believable human figures and faces. The film abounds with stunning scenery of wild open Scottish landscapes (although in this area, no-one can beat the breathtaking painterly scenes in Sylvain Chomet’s animation THE ILLUSIONIST).

BRAVE reasonably deserves its PG rating, as some of the fight scenes might be a little frightening for young children. In this element the film seems more in line with Disney’s classic stories, with their climactic battles of good versus evil. Yet the film comes at this traditional plot with a very fresh approach to create a funny and emotional adventure. It ranks among Pixar’s best.