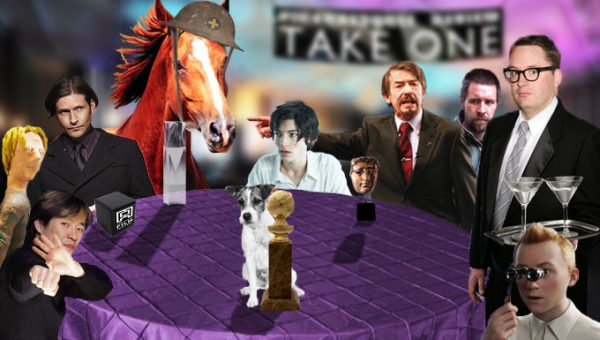 It’s taken me some years, but I’ve realised now that my father has been right all along about Hollywood awards ceremonies – the main ones are a huge exercise in tedious self-congratulation.

When I was young, he would often say this when one flicked across our TV – but not in a disdainful manner, more in the same way one laughs off something one considers ridiculous, but ultimately harmless. Invariably existing to either let people hang out with Brad DiCapriclooney, or to allow George Firthcino to declare how much they love the work of Woody Spielsese, their relevance to what has truly been the best cinema of the year is, and always has been, questionable. I used to scoff; after all, he only goes to the cinema about once a decade, but he’s not often wrong. There has been a growing realisation in my head that the Oscars are not, and perhaps never have been, genuine indicators of cinematic superiority – they are every bit as manufactured and staged as the industry they seek to reward.

…the Oscars are not, and perhaps never have been, genuine indicators of cinematic superiority – they are every bit as manufactured and staged as the industry they seek to reward

This isn’t to suggest anything as crass as the fiddling of results; more to question what the purpose and remit of the Academy Awards now is. There are numerous examples, year after year, of ridiculous inclusions and omissions from the nominations (this year being no exception), true classics being overlooked in favour of the ‘awards movie’ and brilliant performances unrecognised as it was someone else’s ‘turn’. The fact that there is such a concept as an awards-friendly movie speaks volumes. The Oscars’ relevance to the self-appointed cineaste is questionable in this light. Who do they cater for, apart from Hollywood itself? After all, unless a film has a large set of ‘For Your Consideration…’ marketing behind it then it is unlikely to figure come awards season. A good example of this would be Olivia Colman being overlooked (was she even visible?) for her career-making performance in TYRANNOSAUR.

To list and analyse the numerous oddities in Oscar recognition over the years, and in the most recent batch of hopefuls*, would be to state an obvious and ultimately subjective viewpoint. What stands out, however, is a determined stance on the part of the Academy voters to not move with the times or reward films outside the narrow spectrum that plays to their rather predictable tastes. An inability to reward movies perceived as genre films is the most glaring example here, whilst continuing to reward cookie-cutter period dramas and industry favourites. One controversial example for the upcoming set of awards would be the excellent and original performance of Andy Serkis in THE RISE OF THE PLANET OF THE APES. However, given the nature of how it was brought to screen (and a lack of nomination for TINTIN in the animation category) this is maybe not surprising. Serkis has been more hard done by than most in this respect, crafting a career for himself as the go-to man for motion capture performances – a technology that has come on in leaps and bounds since his breakthrough as Gollum in THE LORD OF THE RINGS. It won’t be long before these types of performances need to be looked at more carefully, or the Academy runs the risk of looking (even more) foolish.

This comes in the same year THE ARTIST, a film retreating to the silent black and white of one of Hollywood’s golden ages, is likely to sweep the board. THE ARTIST, with The Weinstein Company behind its charge, is no less a predictable Oscar front-runner than THE KING’S SPEECH was. The Best Picture category, featuring THE ARTIST, HUGO and MIDNIGHT IN PARIS is simply dripping in Hollywood nostalgia. That the derivative, albeit spectacular AVATAR garnered a nomination and favourite status two years ago, primarily as a result of taking over $2bn worldwide, speaks more of the marketing status of the Oscars (and the desire to portray the industry in rude health) than of anything to do with the modern technology behind the feature.

THE ARTIST [is] no less a predictable Oscar front-runner than THE KING’S SPEECH was. The Best Picture category [is] simply dripping in Hollywood nostalgia.

The continuing difficulty of animated features breaking out of their own category and into the main Best Picture category reinforces this fear or rejection of the modern. The complete lock-out of the phenomenon that was THE DARK KNIGHT (Heath Ledger’s posthumous award notwithstanding) outside technical categories goes some way to displaying the continuing scepticism of modern and genre films. It is easy to forget that it took a ‘last-minute’ sweep for THE RETURN OF THE KING (arguably the weakest instalment of the franchise) to reward Peter Jackson et al for the Tolkien adaptations after being overlooked in favour of CHICAGO only the year before.

The Oscars are now primarily a marketing tool – allowing DVD sleeves of weapons-grade guff like TRANSFORMERS: DARK OF THE MOON to declare themselves as ‘Nominated for 3 Academy Awards’

The Oscars are now primarily a marketing tool – allowing DVD sleeves of weapons-grade guff like TRANSFORMERS: DARK OF THE MOON to declare themselves as ‘Nominated for 3 Academy Awards’. Let it not be forgotten that Ben Affleck is often prefixed with ‘Academy Award winner…’ despite the fact this was for the screenplay of GOOD WILL HUNTING (which he wrote with Matt Damon) and nothing to do with his acting. This has long been the case, but I would argue it is their only true purpose as we motor into the second decade of the 21st century. The films and performances rewarded will often be superb, and in many cases genuinely are the best of the year – but that is neither the reason, nor the primary factor, behind the final recipients.

3 thoughts on “Why The Oscars Don’t Really Matter”