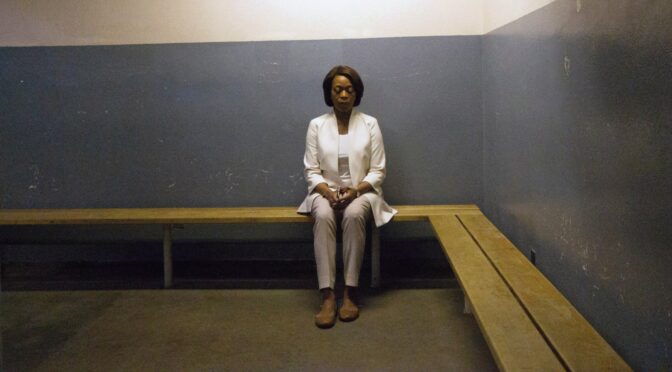 Chinonye Chukwu’s CLEMENCY opens on the devastating, yet vaguely pedestrian-seeming shot of the restraints for execution by lethal injection. Pristinely clean and cushioned, but in the outline of a human figure, it quietly projects the inherent contradictions of the institution of capital punishment: frills meant to evoke humane treatment and professionalism in what is an inherently barbaric act. Chukwu’s film slowly tallies up the cost this supposed justice has on all involved, with the film’s stifling atmosphere underscored by Alfre Woodard’s lead performance.

The film’s opening quickly and purposefully undermines any notion of a dignified exit for the prisoner who fills those restraints when the execution is gruesomely botched. The macabre farce clearly has an impact on the prison warden, Bernadine Williams (Alfre Woodard), who must go on to oversee the impending execution of Anthony Woods (Aldis Hodge). A variety of characters pass through the story, including the bereaved family members of the man allegedly killed by Woods (who, despite admitting to involvement in a robbery at the location, maintains his innocence of this charge, an assertion backed up elsewhere in the film). Every role – big or small – is calibrated carefully to show the emotional toll every facet of the process takes.

“There is a quiet devastation in her performance, which shows her artifice of dispassionate stoicism collapse as the film progresses…”

The commitment to showing that mental and spiritual cost results in conversation trajectories and character interactions that are occasionally slightly on-the-nose. However, overwritten moments are fleeting, and the most powerful and subtle performance is the central one from Alfre Woodard. There is a quiet devastation in her performance, which shows her artifice of dispassionate stoicism collapse as the film progresses, through shifts as small as a mere lack of expression or a disconsolate slumping against a wall. A short scene with the prison chaplain (Michael O’Neill) is a gently piercing example of the emotional attrition her character goes through. Aldis Hodge’s performance also provides more overtly sympathetic troubles to engage with, with a scene opposite Danielle Brooks showcasing the acting talents outside of Woodard’s lead character.

“A careful balancing of visual and story elements creates a focus on specific characters that show how the continuation of capital punishment diminishes us all.”

Visually, the film is not a staid and institutional feeling effort, despite the settings being that in the more literal sense. CLEMENCY has a character arc that feels visually at home with the imagery, and the film is not visually expressive for pure aesthetics. Eric Branco’s cinematography has a depth of shadow to it that feels perfectly suited to the story; Woodard’s Bernadine slips further back into a mental abyss just as the locations seem to fall back from her, isolating her further.

The usual cliché with films of the nature of CLEMENCY is they are ‘difficult to watch’, but to say that would overlook the reality that Chukwu’s film is engaging and thoughtfully constructed. A careful balancing of visual and story elements creates a focus on specific characters and a blend that shows how the continuation of capital punishment diminishes us all.